With the release of “No Time to Die”, the James Bond franchise will be celebrating its 25th movie. To celebrate this incredible milestone Swatch has partnered with 007’s creators to release the 2Q James Bond limited edition watch. The model is inspired by the character of Q who is the head of Q Division MI6’s fictional research and development department. As Q is responsible for the design of all of Bond’s special high-tech equipment and weaponry it only makes sense for this stunning limited edition watch to be designed and inspired by him.

James Bond and No Time to Die

For almost 60 years James Bond has captivated audiences around the world. From Dr.No to GoldenEye and now No Time to Die, 007 has become more than just a fictional character. He has influenced generations of young people and installed a love of adventure and danger in many more. In the most recent movie James Bond will be played by Daniel Craig. To the dismay of diehard Bond fans, No Time to Die has regrettably had many issues surrounding it’s release. The movie was first scheduled close to a year ago in November 2019. Due to unspecified reasons the movie was postponed to February of 2020, then April. The global pandemic, however, has caused even more delays in the movie’s release. With fans hoping for it to be released in November 2020. As the global situation hasn’t yet improved, in the beginning of October it was announced that it will be postponed again to April 2021 in order for the movie to be released in front of a global audience.

Disregarding all the difficulties in the movie’s release Swatch have surprised fans with the release of the 2Q James Bond limited edition watch. Inspired by one of the franchise’s most underappreciated secondary characters, or should we say roles, Q. Q is more of a job title than a specific person. They are the one responsible for designing 007s secret weaponry and equipping him.

Swatch’s timepiece matches both the personality and style of the character. It’s design is a blend between futuristic and traditional matching all aspects of Q. The limited edition model uses the SKIN Irony design as it’s base. The case is made of brushed stainless steel. It is 42 mm in diameter and 6.7 mm thick. A brown leather strap with a tartan plaid pattern gives the model a more vintage tone. The underside of the strap is vibrant red, matching the red detailing on the front of the watch. Blue pointed indices contrast the red outer ring and the sun-brushed silver-coloured dial. The centre part of the dial is skeletonized and reveals the timepiece’s quartz movement. Blue luminescent hands complete the dial design. The 6 o’clock hour marker has been replaced with a “Q” to signify the collaboration.

If you’re interested in purchasing this fantastic watch you can do so by following the link here.

Which is your favourite James Bond film and why? Let us know in the comments below. 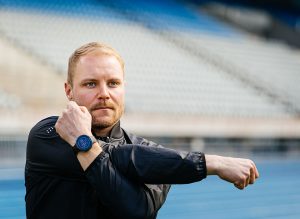 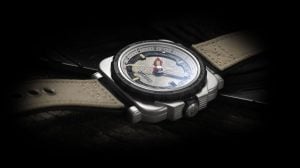 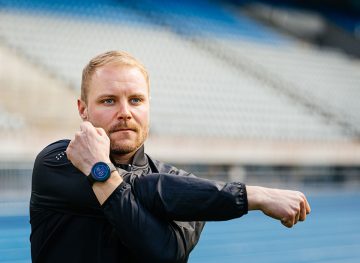 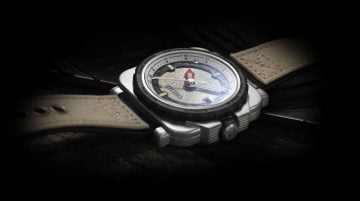 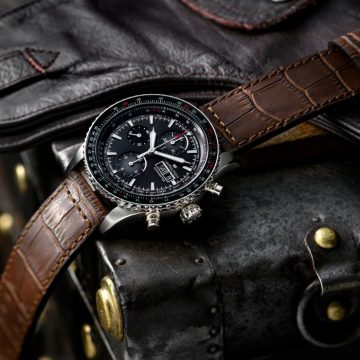