Two of the most famous sports stars on the planet faced off on Saturday night in one of the most anticipated fights of all time. One of the greatest boxers of all time, Floyd Mayweather, took on the most famous face in UFC today, Conor Mcgregor. This was the first time that a fighter from the UFC had stepped into a boxing ring to take on a former world champion boxer – and millions around the world paid to see it.

Unsurprisingly, Mayweather – considered one of the greatest of all time – managed to overcome Mcgregor quite convincingly with a stoppage in the 11th round. But, it isn’t just the sporting achievements of these fighters that we are interested in today – it is the great watches they wear. When it comes to the greatest watches of all time – we’re sure that the fight between McGregor and Mayweather would have been a very close one!

Today we are going to look at some of the greatest watches worn by these incredible fighters. 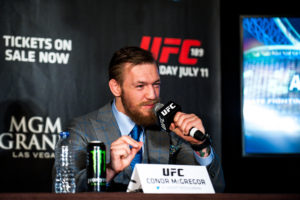 McGregor is not just known for his exploits inside the UFC Octagon, he is also very well known for his great fashion sense. This is a guy who once remarked “There are two things I really like to do: whoop ass and look good.” Two of the ways he makes sure he always looks good is by wearing his perfectly fitted custom-made David August suits and his collection of Swiss watches.

The watchmakers Conor McGregor is known for wearing are Rolex and Patek Philippe – who have produces some of the greatest watches of all time. McGregor’s watch collection features some incredibly refined timepieces which really do look incredible on his wrist. He is often seen wearing some of the greatest watches such as the Rolex Sky-Dweller in rose and yellow gold and a Rolex Yacht-Master II in yellow gold. These are some of the incredibly expensive and desirable watches he wears – although they don’t quite match up in value to Mayweather’s watches! 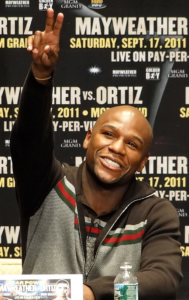 Floyd Mayweather will be celebrating his historic 50th fight without defeat this week – and what a way to celebrate. His fight with Conor McGregor had millions of viewers all around the world – and he won in style. Many would say he didn’t even break a sweat in a fight against a very tough fighter (if not an actual professional boxer). This victory allowed Mayweather to beat Rocky Marciano’s record of 49 fights without defeat – an incredible statistic for a man who has fought many of the top fighters in different weight classes.

On the night before the big fight with McGregor, he sported two Hublot timepieces – one, the Big Bang Unico Haute Joaillerie, retails for $1.1 million. The Hublot Big Bang collection is enjoyed by a lot of top football players and football managers. He waved this particular watch in McGregor’s face the day before the big fight, saying that McGregor was “a microwave meal with a cheap-ass watch on — step your game up!”

Who is the Winner?

When it comes to the greatest watches, these two fighters certainly have picked out some of the best you can find. While McGregor has some of the most impressive, refined watches – Mayweather has picked up some of the most valuable on the market today – which are incredibly expensive! It’s almost impossible to choose a winner without taking into account personal taste.

So, while McGregor was unsurprisingly outclassed in the boxing ring, he manages to tie with Maywather when it comes to the horological battle of their greatest watches. Whose watches do you prefer? Let us know in the comments below!